Mushroom risotto at Skylark on the Hudson in Jersey City

It was a bitterly cold day – in fact it was day 1 of the bitterly cold week and not as frigid as day 3/4 of the same week.  The temperature was below 0 Celsius on 5 of the seven days last week .  Days such as these were much the norm in Michigan where I spent a couple of years. On such cold days, what’s better than a bowl of hot soup and a bowl of warm rice?

Skylark on the Hudson has recently reopened (in mid January 2013) after Superstorm Sandy and with a new menu too.  The restaurant serves “global cuisine with a special tribute to the Jersey Shore” .  The menu includes many Italian / Mediterranean dishes like  Papardelle Bolognese, Greek salad etc. , although there is the occasional Huevos rancheros  and Prince Edward Island mussels.  The Jersey Shore tribute by the restaurant includes the several seafood dishes such as Cape May Salt Oysters.  Skylark on the Hudson has plenty of vegetarian options including a few vegetarian salads.  I would have like to try the curry falafel sliders with spinach, roasted peppers, mint-yogurt, served in a brioche bun.  But that cold day was a soup and risotto day.

While we were taking our times to decide what to get, bread was served with a cold triangle of butter.  A sprinkling of salt crystals on the  butter was a nice touch. I am not sure if the bread was freshly baked or just served in a nice paper bag.  It was a large piece of bread for two people to share.  The cutlery that we had could not have made a dent on the bread.  We had to use our hands to break / tear the bread.  It tasted fine, soft on the inside, with a hard crisp exterior.  I just wish we were given a proper knife to cut the bread or that the bread were pre-cut. 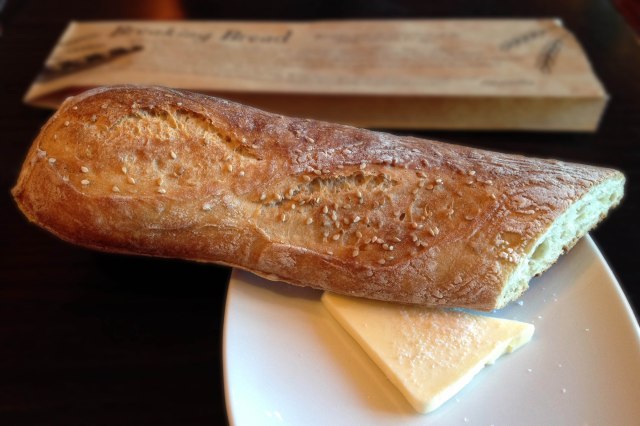 Bread served with a triangle of salt sprinkled butter

The tomato oregano soup arrived warm (met expectations) with a sprig of basil /mint (sorry, I cannot remember what it was).  It was served with an open face grilled halloumi cheese sandwich. The grilled cheese was warm, and while it tasted fine, it left us wanting more out of its texture.  It was leathery and chewy in a not-so-nice way.  The tomato oregano soup was one of the best dishes we could have had that day. 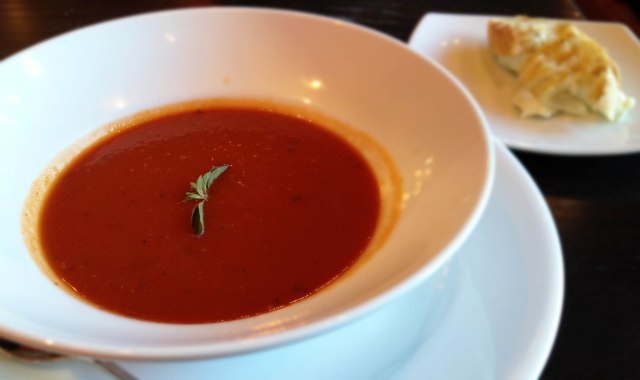 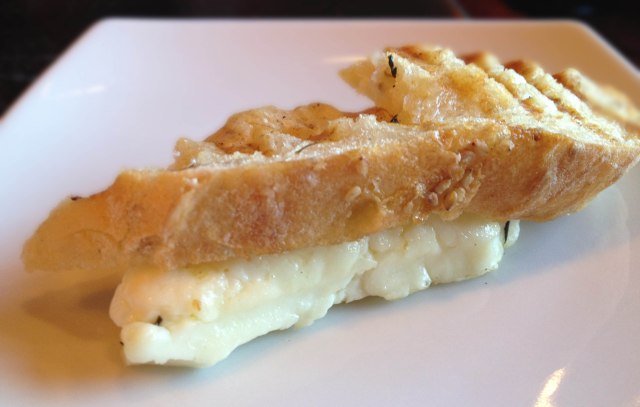 The mushroom risotto was served with baby arugula and truffle espuma (or rather foam in everyday language).  The rice was well cooked and creamy with abundant truffle flavoring.  I would get this dish again – especially because I love to eat hot, vegetarian  food on a very cold day.  There was plenty left and my friend took some home. 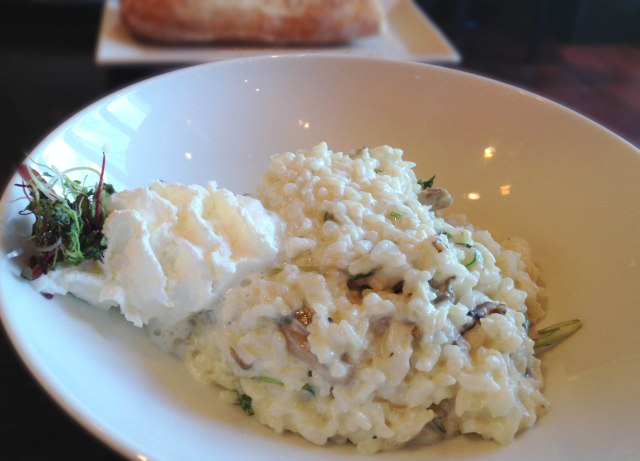 At Skylark on the Hudson, portions were large  for the soup and the risotto. I wonder why some Yelpers think portions are tiny.  For Yelp reviews, look here.

Service left something to be desired.  There were perhaps 8 guests besides us and 4 or more servers at a not-so-busy lunch time of 2.30 PM . The servers were talking among themselves with their backs towards us and we had a to wave a few times to get someone’s attention – for a water refill, for some fresh pepper on the risotto, and to ask for the check.  One good point though is that the servers are friendly.   Eating at Skylark on the Hudson is not a “fine dining” experience, but is certainly not bad.

Why would you go to Skylark on the Hudson?

Skylark on the Hudson has potential to wow you – with its decor, menu and friendly staff. If they improve their service, this could be a winner!  I might go there again – to check out the curry falafel sliders and to report back to you folks.

← A hidden gem – a.cafe – in midtown NYC for excellent brunch on the weekend
Delicious gelatos from a gelato making class at Mia Chef Gelateria →