Just in time for Oktoberfest…

This is my first post that is not about eating/ drinking at NYC.  It was summer when I went to the Redhook (micro)brewery in Woodinville, WA.   I have been meaning to write all through the summer about my experience at the Redhook brewery and what I learned then, and have my act together right in time for Oktoberfest 🙂 🙂

Beers of the Redhook Brewery

I was visiting my cousin in Redmond, WA at the same time that she had other family visiting her too.  Some of them were keen to visit a microbrewery near by and I was just keen for some blog material (honestly!!).  I suppose the Redhook Brewery was the closest from her house.  I can’t remember if there was any other reason for the choice.  We made it in time for the last brewery tour of the day (including the tasting) – for the princely sum of $1 per person. This was the best dollar that I ever spent and not just on beer – not only did I learn something about beer, but I also got to taste 5 different beers (of 5 oz each) in 45 minutes.   Now, isn’t that a lot of beer for a dollar? When we wrapped up the tour and the tasting, we just HAD to get more beer to drink and of course HAD to eat at the Forecaster’s Pub in the brewery.

Beers we tasted at Redhook Brewery

Hops are on the right 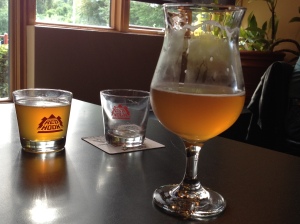 Had I written this post soon as I returned from Redmond, there would have been more for me to write about Redhook and more for you to read about the microbrewery.  But, all is not lost – I have been reading more about beer and Oktoberfest while drafting this post.

Other beer and wine festivals

I have been so excited about sharing my newly acquired beer knowledge, that I almost forgot to write about the food at the Pub at Redhook Brewery.   We ordered many dishes and as you can guess, mostly vegetarian.

Nachos & cheese with jalapenos and guacamole 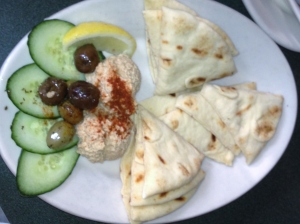 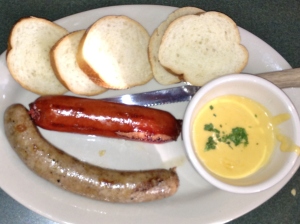 Other vegan / vegetarian options at the Forecaster’s Pub that we did not try were:

Some of my best experiences with beer

While writing this post, my thoughts inadvertently went to some of my best experiences with beer and I was wondering which of the following did I enjoy the most?

Tell me, what is your favorite beer story??  And what are your plans for Oktoberfest this year??

← On Twitter too!
Dosa Hunt – a search for the best vegan South Indian crepe in NYC →