Cinco de Mayo (Fifth of May) was the day on which the Mexican Army defeated the French in the Battle of Peubla in 1862.  In many part of the US with a heavy Mexican – American population, Cinco de Mayo has evolved into a celebration of Mexican culture and heritage.   Many restaurants in NYC have Cinco de Mayo specials of which Empellon Taqueria and Empellon Cocina both (by Chef Alex Stupak) have a 6 course pre-fixe menu for dinner tonight and for brunch/ dinner tomorrow in addition to unlimited Margaritas, beer and sparkling wine (check their websites for more detail).  For me though, Cinco de Mayo is just an excuse to write about some spicy tacos that I had recently at Empellon Taqueria.

Overall, I enjoyed the food and drinks at Empellon Taqueria as much as I enjoyed the food and drinks at Empellon Cocina (see this post from last year).   The bar at Empellon Taqueria serves great cocktails, but is either understaffed or the bar tenders are overworked and can’t seem keep up with the guests, so you might well have to order a beer or a standard drink.  The menu at Empellon Taqueria is similar to the one at Empellon Cocina – with different types of salsas, although with more tacos. The food at Empellon Taqueria is delicious though it can be very spicy if you do not check with your server.    It can be very unpleasant for a person who does not like / cannot tolerate heat from spices to be served food that has spices lurking in the dishes with no warning what-so-ever.  The chocolate flan that we had for dessert was worth it after the spicy tacos that we had, but we wondered why we were not shown a printed dessert menu.   On the night that we went we were one of the few couples – Empellon Taqueria seems very popular with groups of people and that may well be a reason why it can be hard to hear your server or your dining companion.

We had a late reservation (seem to get a reservation for two at Empellon Taqueria only after 10 PM!).   As mentioned earlier, the bar was very busy and a cocktail menu was not readily available.   After waiting at the bar for 10 minutes, we got the bartender’s attention and quickly ordered a Michelada each (we knew they had to serve a Michelada,  as we had had one at Empellon Cocina before).    The Michelada at Empellon Taqueria was very spicy and I can’t say I enjoyed it much.  One half of the glass’s rim was salted, there was no lime juice to balance the spiciness of the arbol chile sauce.   This Michelada would have been better with more salt and with more lime.   Meanwhile, the restaurant and bar was getting busier, and people were reaching over our heads to get drinks from the bar.  It was hard to have a conversation at the bar not just because of the high noise level, but also because of the fear of watching out for drinks spilling over our heads.  After about 20 minutes that seemed like eternity, we got a table in the dining area at the back. 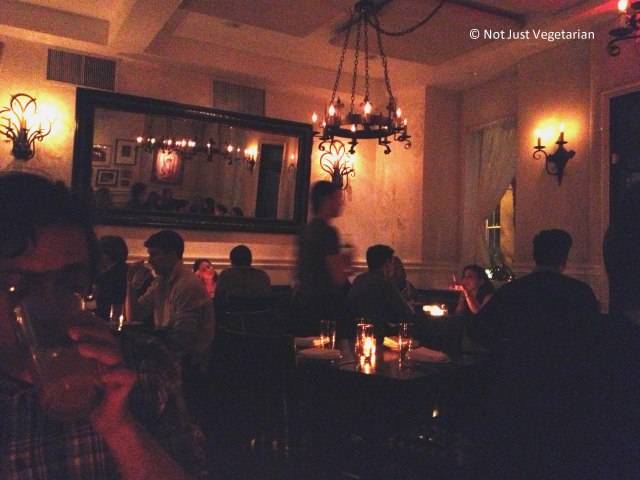 Inside the dining area at Empellon Taqueria NYC

We got the guacamole as soon as we sat at the table.  We got the guacamole that came with tortilla chips (and not the masa crisps that we got at Empellon Cocina) and with two salsas – smoked cashew and arbol salsa.   The latter was very spicy but was great with the guacamole.   The chips tasted very salty, especially towards the bottom.  By the way, did you know that guacamole consumption on a single day in the US is the third highest on Cinco de Mayo after July 4th, and Super Bowl Sunday?

We got the queso fundido with green chorizo and spinach.   This dish was incredibly hot (in temperature)!!  It had barely 3 leaves of spinach.  This was a very rich and filling dish with the cheese and chorizo.  I was intrigued by the green chorizo when I ordered this dish.  Green chorizo is made with tomatillos, cilantro, and chiles according to this page.  The tacos that came with this dish looked hardly cooked –  they looked translucent and not opaque the way they look when they are well cooked.  One of my pet peeves at Mexican restaurants is that we are usually served just 3 soft corn tortillas with guacamole.  Those tortillas vanish even before we realize that we ate them up  and we are left with just the guacamole.  At Empellon Taqueria, there was no shortage of tacos with the queso fundido, there were at least 6 tacos and large ones too.  It’s a pity that they were not cooked enough!

Meanwhile, I got the yuzu margarita.  Here is my learning for the day, all margaritas are not served with crushed / blended ice and not all of them have to have a salted rim.  They must though, have tequila and lime.  This yuzu margarita had a distinct yuzu flavor, not as tart or acidic as grape fruit, and not very sweet as an orange is. I would have enjoyed this margarita with some salt on the glass rim – may be I should have asked for it to be served that way. 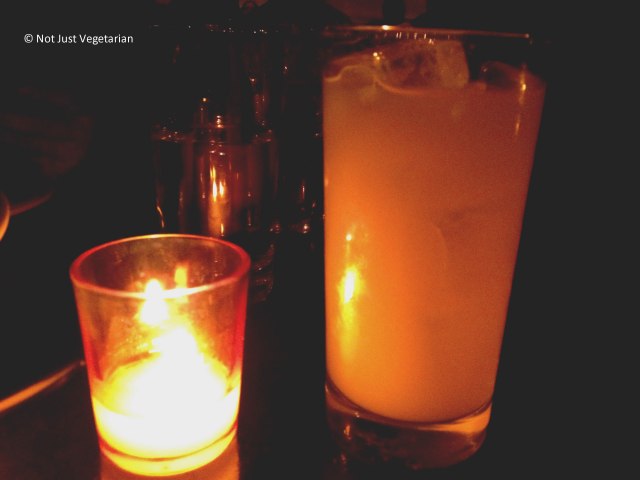 We ordered two tacos and both appetizer portions.  The tacos seemed large for an appetizer portion, and were both surprisingly spicy. We got the Maitake mushroom tacos which had some rajas (chiles) at the bottom.  We did not realize that this would be spicy from the description (my Spanish is not great!).  It was also hard to tell – the chiles were under the onions and the cheese.  I enjoyed this dish, but not my friend.  The mushrooms were crispy, not too salty and had a nice caramelized and smoky flavor too.  Oh yes, the tacos were cooked this time. I recommend this dish only for lovers of spicy food.  If you are not one, as for medium spicy or to include less rajas. 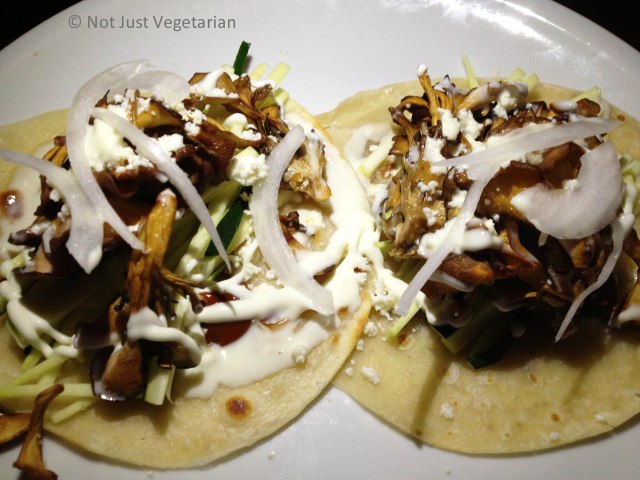 We ordered the fish tempura tacos.  The tacos were topped with shredded cabbage and a lime mayonnaise.  The batter dipped and fried fish was extremely flavorful.  The cabbage and lime mayo seemed bland, but lurking underneath was the spicy salsa verde.  Again, I was enjoyed these tacos, but not my friend.   Now, a menu does not have to list every ingredient, but should it not indicate that something is likely to be spicy?

We were full with all the dishes that we ate already, but were keen to get dessert to recover from the spicy tacos.  I love spicy food and often, it’s just an excuse to eat chocolate dessert.  After all, a Mexican restaurant is bound to have chocolate dessert options, right?  When we asked for the dessert menu, our server rattled off four diff dessert options – all complex, and it was also too tough for us to remember everything she said.  It was hard to hear her too given the crowd and ambient noise.  We asked her if there was a menu listing the dessert  options, she said there was none.  Were the desserts made on the fly, based on the ingredients available after the planned desserts ran out? Really, restaurant owners and chefs, how much does it take to print out a menu?  It’ is alright to not have a dessert menu if your desserts are a simple ones, but why so, if you have complex desserts with multiple ingredients?  Why torture the servers to remember everything?  We went for the chocolate flan, the only dish that we could remember from our server’s description.

The chocolate flan was pretty and delicious to say the least.  Honey was drizzled outside the chocolate flan in concentric circles.  Cinnamon sugar was placed in two heaps at diametrically opposite sides of the flan and a dollop of Mexican cinnamon ice cream topped the flan.  The cinnamon ice cream was fantastic, with mild levels of cinnamon and not cloyingly sweet.  Overall a delicious dessert and worth the wait.

There are some limited vegetarian (and some vegan) options at Empellon Taqueria.

← “Red Obsession” from the 2013 Tribeca Film Festival
Sicilian cauliflower and an Apricot jam and camembert sandwich at Indie Food and Wine →
Join 1,523 other followers