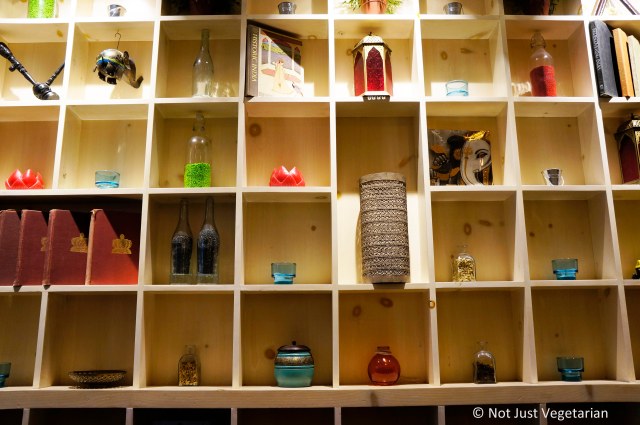 A vada pav is a potato patty served in a bun and with cilantro and garlic chutney, often sold by street food vendors (very rarely in any sit-down restaurant) in Mumbai / Pune or elsewhere in the state of Maharashtra. There are a couple of chains – Goli vada pav and Jumbo King –  now in India that serve vada pavs.  At Bombay Duck Co. the vada in the vada pav was very much the same vada that you get back in Mumbai / Pune.  The pav (=bread – from Portuguese (pao?))  was a very soft slider bun – I suppose it’s easier to get slider buns than pav in the NYC area. The bun was grilled yet soft with a generous amount of butter.  The green chutney made from cilantro, green chilies and onions had just the right amount of zing and flavor.   Do not miss eating the vada pav at Bombay Duck Co.  – this vada pav is as close to the real thing you can get in NYC and without heading to India or if you are not keen to risk eating at a roadside vendor in India !!   If you want to make vada pav at home, here is a recipe by A Bit of this and a Bit of That… mostly about Food 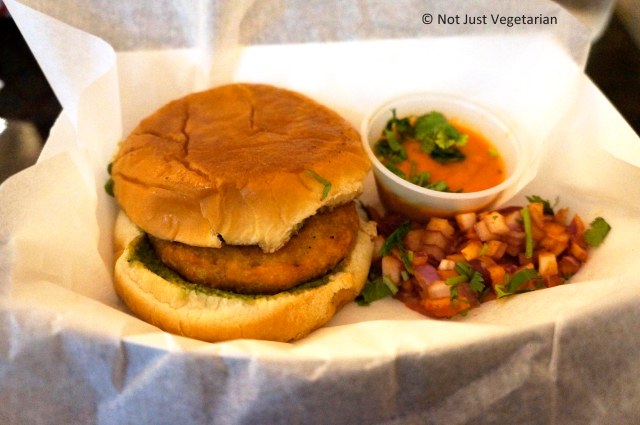 The spinach cutlets were also delicious. The cutlets had potato in addition to spinach (like aloo tikkis with spinach) pan fried – with a thin crispy caramelized exterior and soft cooked potatoes and spinach inside.  Again well spiced and not something you want to miss!! 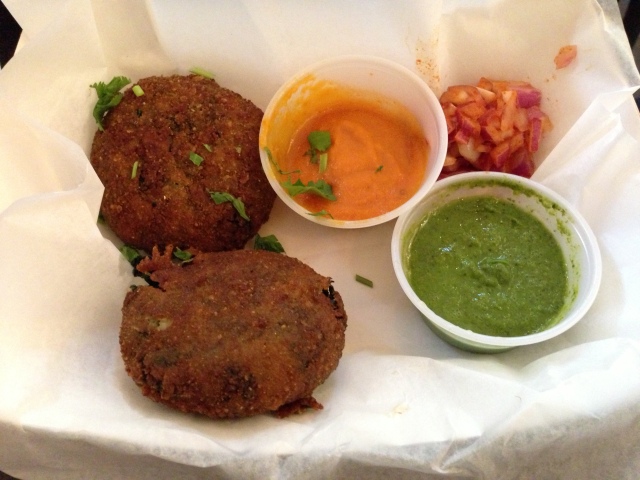 There are fries, and there are good fries and then there are masala fries (clearly in a league of their own!).  At Bombay Duck Co., the masala fries with chaat masala were simply too good to miss if you like fries of any sort.  You have to get these if you like your fries spicy, crisp outside, soft inside!!  We felt that the tomato sauce / ketchup served on the side was like Hot’n’Sweet.  The photo below is courtesy of My Voice Over Gal (do check out her website – she is fantastic voice over artist and an amazing person!)

The paneer curry with rice was just the right portion for the price. The curry / gravy was freshly made, the paneer was fresh and soft (definitely not reheated). 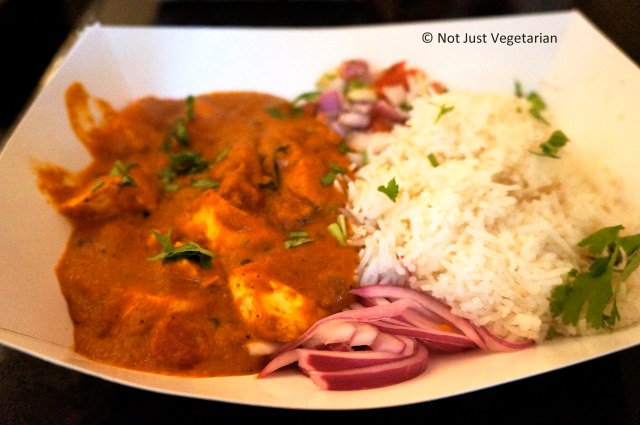 Paneer curry and rice at Bombay Duck Co. in NYC

The fish fingers was a let down – relative to the other dishes at Bombay Duck Co. The fish was slightly smelly and did not have too much flavor.  The dish was dipped in a spicy batter and fried to a deep brown.  I cannot compare this fish to a fish from a koliwada (fisherman colony) because I have not had this dish back in India. 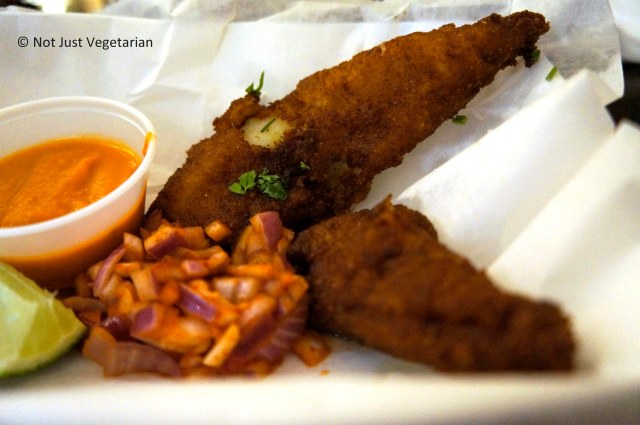 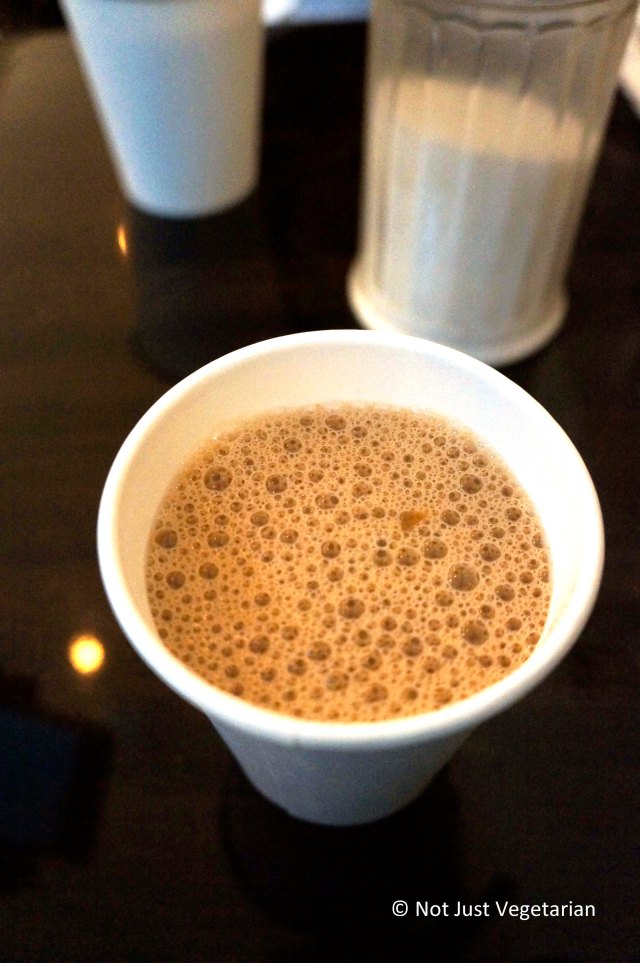 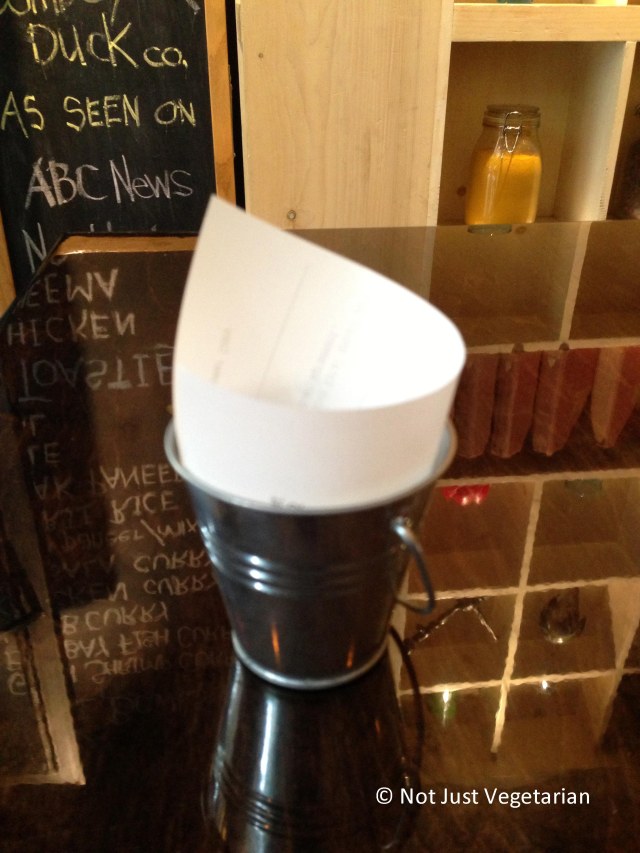 I would go back to Bombay Duck Co. again to try their famous fish curry (made from the Bombay Duck), and may be even their dosa!  The food feels home-made and tastes yummy.
Note: There is no restroom in the restaurant
Related posts on Not Just Vegetarian: