July 5, 2013 · by Not Just Vegetarian · in Barbecue, Lunch, Mexican, NYC, Tres Carnes · Leave a comment
Isn’t warm weather synonymous with barbecue?  Did you barbecue yesterday to celebrate the American Independence Day? If you did not and want to know a great place where you get smoked barbecued meat straight from the grill (granted without the “pleasure” of working the grill yourself), then Tres Carnes is “the” place to go  to!  Tres Carnes serves Texican (the new word for Tex-Mex?) – something in between Texan barbecue at Hill Country (where you get meat by the pound) and Chipotle  Mexican Grill / Dos Toros (both serving Assembly-line Mexican).  At Tres Carnes, a fast casual eatery, Executive Chef Sasha Shor and Pit Master  Mike Rodriguez (formerly at the famous Salt Lick), have created food that brings together slow-smoked Texas barbecue and the fresh flavor profiles of Mexican food.  It was very refreshing to see Chef Sasha chatting with guests, during the super-busy lunch hour! 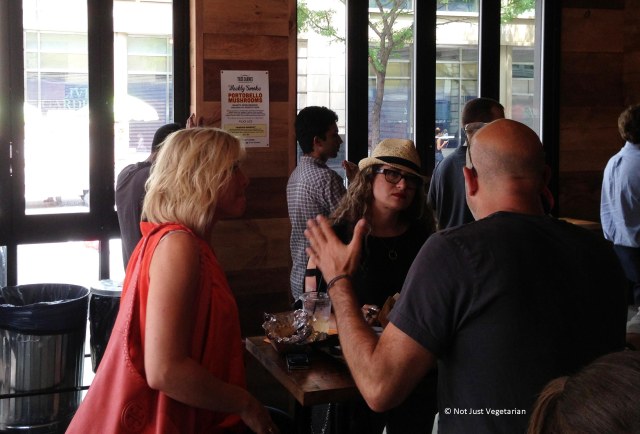 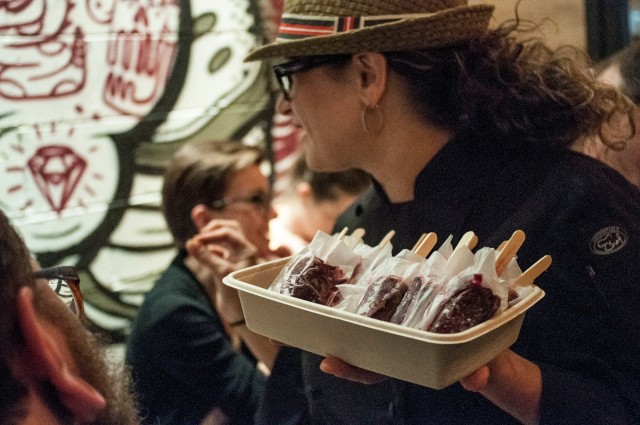 Tres Carnes has a fantastic mural by local artists Sheryo and The Yok. 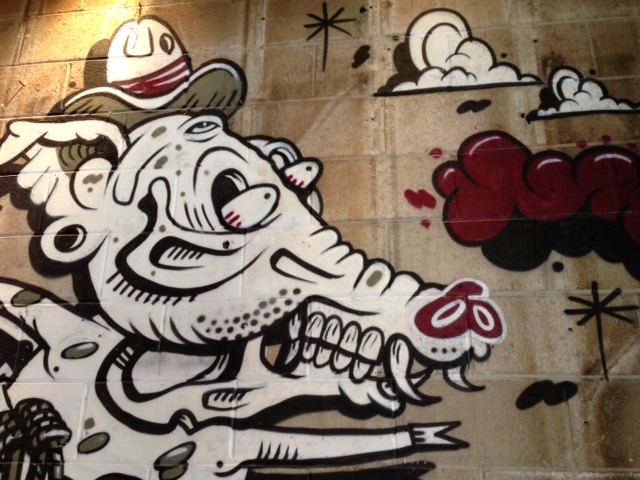 I was recently invited to Tres Carnes if I was an adventurous eater to check out rattlesnake, cactus etc.  I confess –  I am not adventurous enough to try eating rattlesnake!  I was keen to try their grilled cactus, but when I  went to Tres Carnes, they had mushroom and squash as the only grilled vegetables, and I had to try those.  A friend who eats pretty much everything except shellfish joined me for lunch and between us, we ate the chef recommended dishes of brisket tacos, burrito bowl with pork, chicken tacos, and burrito bowl with grilled mushroom and squash.  While I want to tell you that you must get the mushroom tacos (and they are delicious), I must say that I was won over by the smoked and slow cooked pork (recommended by Chef Sasha Shor) and the ever popular brisket tacos.   Tres Carnes showcases one meat / vegetable for the week – it was mushroom last week and antelope this week!  The meat sourced is very fresh and is smoked on local hardwoods (cherry and oak) for 6 – 18 hours depending upon the meat.  No wonder the flavor is sooo good!! 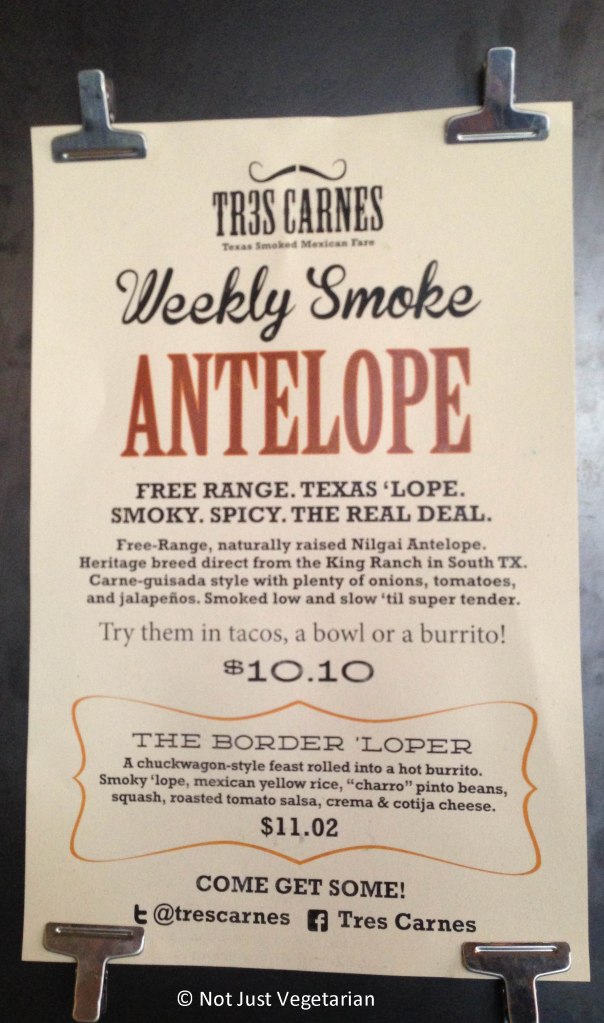 If you go at lunch time as we did, then expect the line to go out the door and don’t be surprised if the line goes round the block!  We were fortunate enough to be guests of Tres Carnes and had a table reserved (more likely guarded) for us.  We were greeted with guacamole and chips.  The guacamole tasted extremely fresh and had a good balance of lime juice, salt and cilantro.  Strangely (or at least it seemed strange to me that) there no chopped onions or tomatoes. 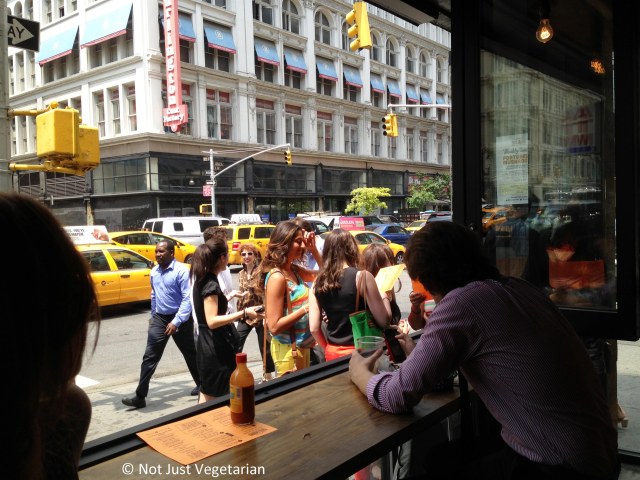 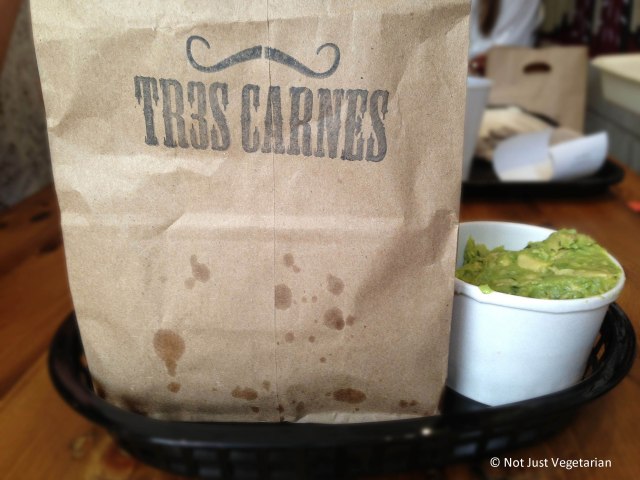 We got a couple of micheladas on this warm summer day.  I got the classic Michelada with Valentina hot sauce.  I would have preferred it with more lime and with a heavily salted rim to balance the hot sauce. 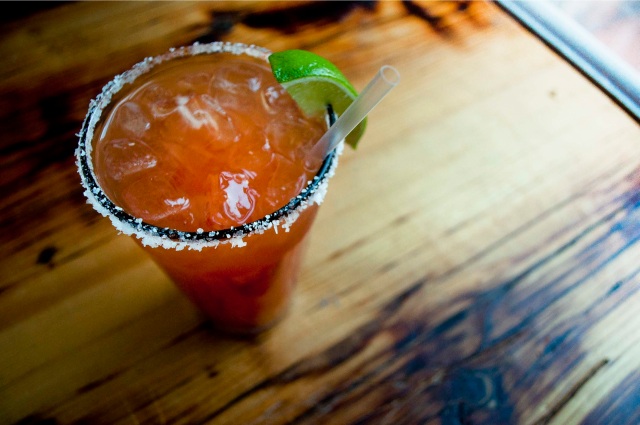 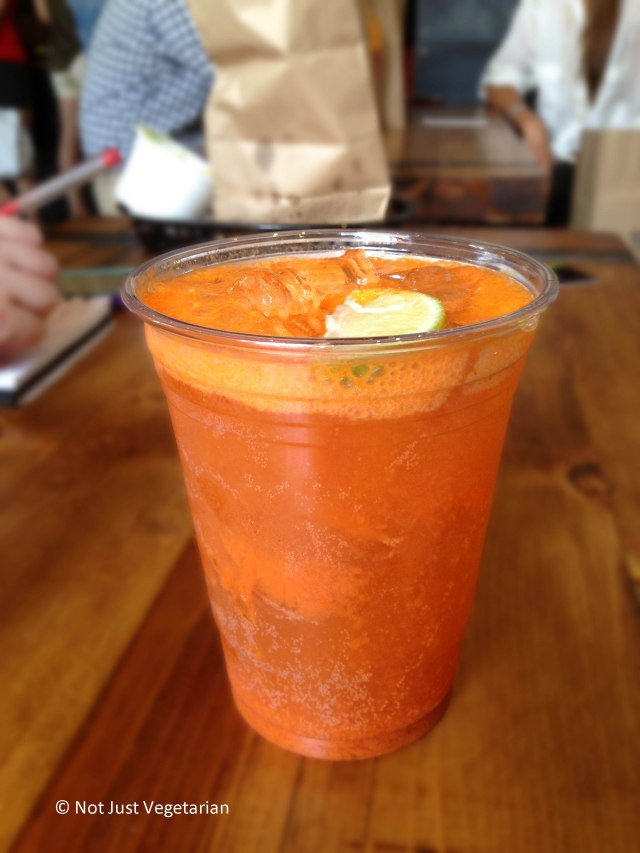 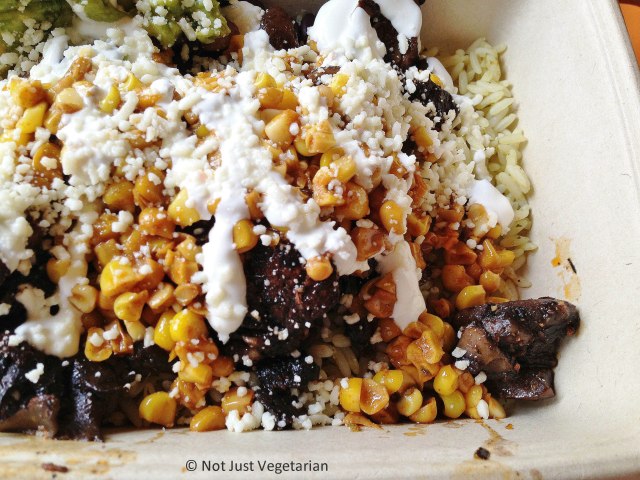 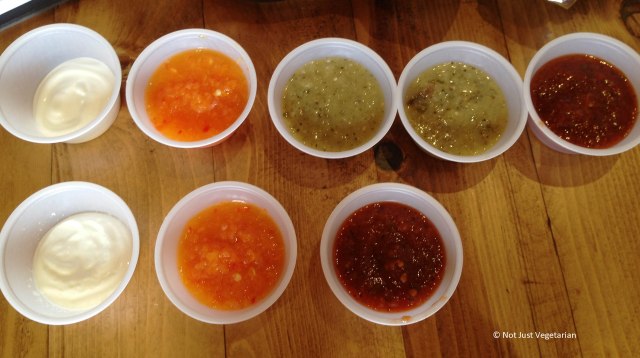 The pork and squash burrito (bowl) was served with yellow rice, pinto beans, guacamole, picked onions, and cotija cheese.  This is my favorite dish of the lunch.  The pork was super tender, had a very appetizing smoky aroma, and was extremely tasty with the rice, beans, and all the toppings.  You must get this dish if you enjoy pork.  I did (and I don’t eat pork very often)!! 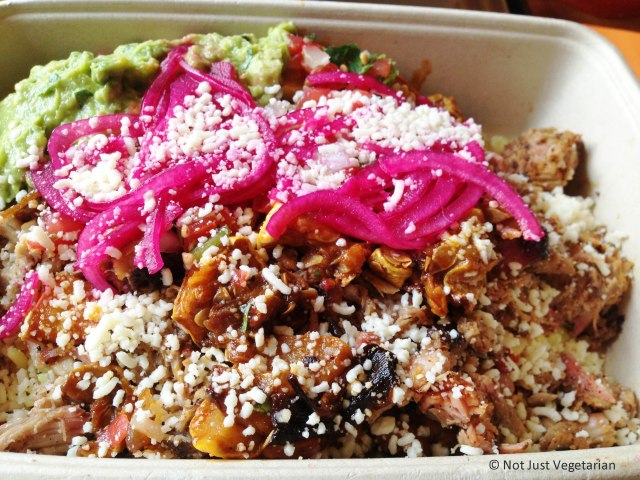 I had to try the brisket tacos.  The tacos had slow cooked and smoked brisket, guacamole, pico de gallo, crema, and radishes.  I ate brisket for the very first time, and am tempted it try it again, only because of Tres Carnes. 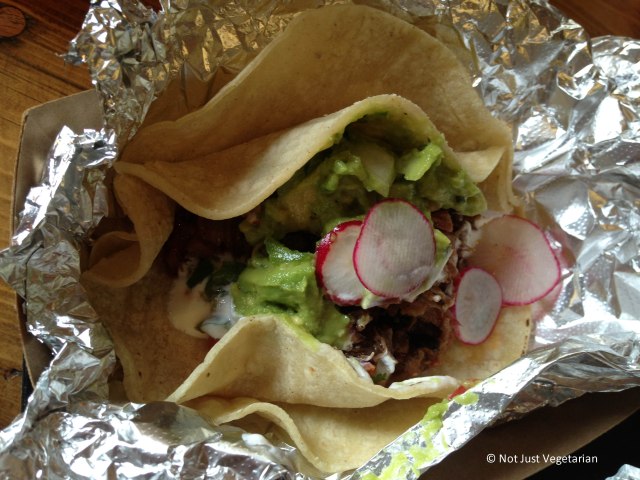 At the end of our meal, we were so stuffed that we did not have space for desserts (a double smoked churro is listed on the menu, but was not served when we went).  Tres Carnes plans to introduce paletas (popsicles) for the summer in another week or so, in pineapple jalapeno and blackberry mango flavors.
Go to Tres Carnes if you want to enjoy barbecued meat without all the trouble of sourcing and making it yourself ( (how many of us in Manhattan have the space or the money to own an outdoor grill? I don’t have the space or the “knowledge” to grill!).  I would rather leave it to the experts – and it does not cost a lot to grilled meat from the experts – at Tres Carnes, you can get tacos and burritos made by experts for less than $12!
(Mexican cuisine) Related posts on Not Just Vegetarian:
Tres Carnes:
688 Sixth Avenue (corner of 22nd St), New York, NY 10010;  Ph: 212-989-8737;
The Tres Carnes website has precious little information, but the menu.
Hours of Operation are

Note:  I was a guest of Tres Carnes, but all views expressed in this post are mine.

← Go to Bombay Duck Co. for Mumbai Street food in Manhattan
A new beginning … Not Just Vegetarian from London →
Join 1,523 other followers